The great Fulani Empire is a combination of arts culture geographical zones of the Ancient Fulani.

Fulani, also called Peul or Fulbe, a primarily Muslim people scattered throughout many parts of West africa, from lake Chad, in the east, to the Atlantic coast. They are concentrated principally in Nigeria, Mali, Guinea, Cameroon, Senegal, and Niger. The Fulani language, known as Fula, is classified within the Atlantic branch of the Niger-Congo language family.

Interaction of the widely dispersed Fulani with disparate other groups has produced a variety of socioeconomic patterns. The Fulani were originally a pastoral people, and their lives and organization were dominated by the needs of their herds. The pastoral Fulani today enjoy greater prestige than town and sedentary agricultural Fulani as the most truly representative of Fulani culture. Interaction with other groups has sometimes resulted in a considerable degree of cultural absorption. This is most notably the case in northern Nigeria, where perhaps half of the Fulani have adopted the Hausa language and culture and where, as a result of a series of holy wars (1804–10) purporting to purify Islam, they established an empire, instituting themselves as a ruling aristocracy. The urban Fulani are the most ardently Muslim; pastoral Fulani are frequently lax and sometimes even nonpracticing. The pastoralists also exhibit a much greater variation of physical traits. They wander in nomadic groups, making temporary camps of portable huts. Some of their dairy products are exchanged at markets for cereal foods; cattle are rarely killed for meat. Many sedentary Fulani, who frequently have become sedentary as a result of the depletion of their herds, also own cattle, but they rely principally on cultivation.The social structure of the pastoral Fulani is egalitarian, in marked contrast to that of other Muslim groups, such as the Hausa, and to most sedentary Fulani. The influence of Islam on kinship patterns is evident in the general preference for cousin and other intralineage marriages. Most men are polygynous, the typical household unit comprising the family head, his wives, and his unmarried children.

The Fulani are a large and widely dispersed group of both nomadic herders and sedentary farmers living in the African Sahel/Savannah belt. Currently, they reside mostly in the western part of Africa, but some groups are dispersed up to the Blue Nile area of Sudan in the east . Although some historians postulated an origin of the Fulani in ancient Egypt or the Upper Nile valley , written records suggest that the Fulani spread from West Africa (currently Senegal, Guinea, Mauritania) around 1000years ago, reaching the Lake Chad Basin 500years later. They founded several theocratic states such as Massina , Sokoto, or Takrur , and many Fulani abandoned the nomadic lifeway and settled down, including in large urban centers. This expansion was accompanied by a process of group absorption of sedentary peoples called Fulanisation,that led to shifts in ethnic identity of some sedentary peoples, as has been described in North Cameroon . However, several Fulani groups retained their very mobile lifestyle relying on the transhumance of their livestock and cattle milking. These fully nomadic or at least semi-nomadic groups are still present in several Sahelian locations, especially in Mali , Niger, Central African Republic and Burkina Faso . All Fulani speak the fulfulde Niger-Congo west-Atlantic language (a language continuum of various dialects), consistent with their postulated Western African ancestry . Similar to other pastoralists, the Fulani experienced specific selection pressures probably associated with a lifestyle characterized by transhumance and herding . Lactase Persistence (LP) is a widely studied genetic trait with evidence of recent selection in populations who adopted pastoralism and heavily rely on dairy products, especially drinking fresh milk. LP is associated with the control element of the LCT gene on chromosome . Specific polymorphisms in this region prevent the down-regulation of the LCT gene during adulthood and confer the ability to digest lactose after weaning . The LP trait is particularly frequent in northern European populations, pastoralists from East Africa, farmers and pastoralists from the Arabian Peninsula, and Arab speaking pastoralists from northeastern Africa and the Sahel/Savannah belt . To date, five different variants conferring LP in populations across the globe have been identified . The independent genetic backgrounds of these polymorphisms suggest convergent adaptation in populations with dairy-producing domesticated animals. The T-13910 allele is reported to be the key variant regulating maintenance of LCT gene expression in European adults. This variant is generally not detected in most East African and Middle Eastern populations, where other LP variants are observed instead. Fulani populations living mainly in the western Sahel/Savannah belt, however, carry the European-LP mutation with frequencies ranging from 18 to 60%. The presence of this “European” LP variant at relatively high frequencies across different Fulani populations is puzzling and could either result from convergent evolution in both Africa and Europe or from gene flow between ancestors of the Fulani and Europeans. The later hypothesis is supported by the fact that T-13910 has not been detected (or is only present at very low frequencies) in neighbouring populations of the Fulani and that European admixture in Fulani genomes has been reported in previous studies . Details surrounding the European admixture event and the post-admixture selection of the European LP mutation in Fulani genomes remain unclear. Studies based on uni-parental markers reported higher frequencies of western Eurasian and/or North African mitochondrial DNA (mt DNA) chromosome haplogroups in the Fulani than in neighbouring populations. However, studies on Alu insertions did not lead to similar results, connecting instead the Fulani with East African pastoralists . In this study we analyse genome-wide single nucleotide polymorphisms (SNP) data from 53 Fulani pastoralists from Ziniaré, Burkina Faso to investigate the history of the Fulani population and the patterns of Eurasian admixture in their genomes, and to uncover the origin of the LP variant they carry. We perform genome-wide selection scans to investigate the strength of selection on the LP region and to identify other additional genomic regions that experienced selection during processes of adaptation to herding lifestyles in the Fulani. Lastly, we attempt to identify additional genomic regions associated with the ability of digesting milk during adult life by performing, for the first time in published research, a genome-wide association study (GWAS) on the lactose tolerance phenotype in adults.

If the cattle die, the Fulbe will die 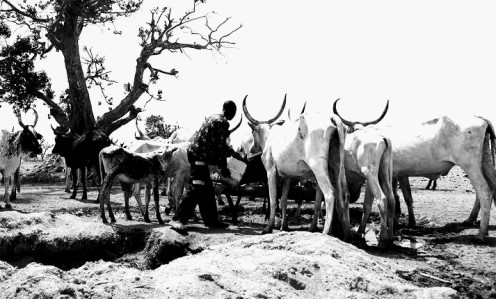 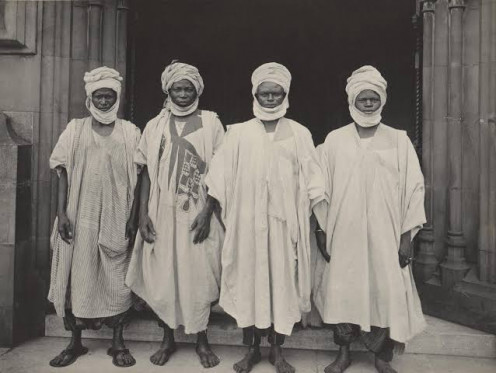 Adamawa, traditional emirate centred in what is now Adamawa state, eastern Nigeria. The emirate was founded by Modibbo Adam, who, under the authority of Sheik usman dan fodio, began a Fulani jihad (holy war) in the region in 1809. Adama moved the capital of his kingdom, which was then known as Fumbina, several times before settling it finally in 1841 in Yola, which has since remained the seat of the emirate. At his death, in 1848, Fumbina extended over parts of present-day eastern Nigeria and most of northern Cameroon; even as the easternmost emirate of the FulaniEmpire, however, it was required to pay annual tribute (mostly in slaves) to the sultans at Sokoto, the Fulani capital, 555 miles (890 km) west-northwest.

Adama was succeeded by four of his sons. Lamido (Lord) Hamman (usually known as Lawal [Lauwal, or Lowal]) consolidated Fulani control during his reign (1848–72). During the weak rule of Sanda (Saanda; 1872–90), the Royal Niger Company established trading posts along the Benue River in Adamawa. When Emir Zubeiru (1890–1901) tried to force the British to leave Yola in 1901, British troops captured the town and compelled him to flee. After Adamawa was partitioned in 1901 between British Northern Nigeria and German Kermeroon (Cameroon), Bobbo Ahmadu (Bobo Amadu; 1901–09), Adama’s fourth son, became emir of Yola in the British section of the state. After World War I, part of the Cameroon portion of the emirate came under French administration and part remained under British rule. The emirate’s territories eventually came to form almost all of northern Cameroon and part of eastern Nigeria. 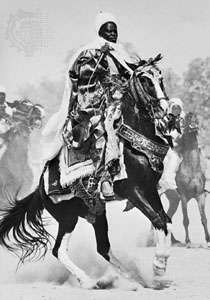 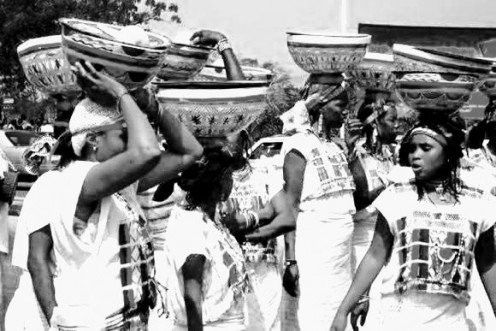 and gourds, and the use of black, red, yellow and white. Important collections of Fulani art appear at the Fowler Museum at UCLA and the Musée de Bamako in Mali.

Gourds decorated by Fulani artists range from those with a plain to an elaborate patterned surface. They commonly take one of the four following shape

When decorating gourds, Fulani women use abstract motifs, such as circles, squares, triangles and lines, as well as figural motifs such as people, camels, and airplanes. There are two main methods of decoration: pyro-engraving and pressure engraving. Pyro-engraving involves burning lines into the surface of the gourd with a hot metal blade, while pressure engraving generally consists of using a jalbal (an iron point). Pressure engraving designs created by pastoral Fulani generally take two forms:

Kaakel demonstrate that gourds are an important part of a woman’s social and economic status. Kaakel is a way for women to display fifty or more gourds encased in wooden mesh supported by two wooden poles. Because gourds are lightweight and easy to transport, they provide an ideal art form for those who lead a nomadic lifestyle.

In the Middle Niger area of Mali, there is a renowned class of male weavers known as the madoube. Men typically weave while women spin wool and cotton. One type of textile produced by the madoube is called khasa. These range in size from approximately 3.9 to 4.2 feet (1.2 – 1.3 meters) by six to eight feet (1.8 to 2.4 meters). Herders use khasa to keep warm and ward off mosquitoes. The dominant color is white, but black, red and yellow are also used.

Kereka are another form of textiles created by madoube. They are suspended over the bed in a tent like fashion and are used as mosquito nets. The dominant color of kereka is red, but white, black, and yellow are also common. Typically, they measure approximately sixteen by six and a half feet (4.8 by two meters). There is a wide range of patterns, however, and many are based on similar geometric designs (Imperato 1976). Arkilla are also a type of textile used as a mosquito net that are hung by a bride’s marriage bed. Hairstyles also provide an important example of Fulani creative expression. Among women, there are two basic styles on which others are based:

Personal adornment is an important part of gerewol, the beauty competition during which three of the most beautiful maidens choose the most handsome Fulani man. Men line up and dance for hours while making exaggerated facial expressions and standing on their tip-toes to showcase their charm. Men use red-colored ocher on their faces, tight wrappers around their hips, white ostrich plumes on their headdresses, and strings of white beads crisscrossing their chests. They use black make-up on their lips and rims of their eyes to highlight the whiteness of their teeth and eyes.

Fulani aesthetic expression is, with exceptions, inscribed on objects or sites of an ephemeral nature. Above all, Fulani people are known for their mastery of verbal art expressed in song and poetry. They are also renowned for their elaborate art of body adornment. Men and women alike are fond of tattooing. They wear amulets (lohol) as both protective and decorative elements. Women wear heavy twisted gold earrings (dibi), gold necklaces (caaka), and copper or white metal bracelets, round or open with bulging extremities, and delicately engraved with dotted lines. Blacksmiths used to make heavy and thick anklets that gave young Wodaabe women a “cowlike” step, much appreciated in this herders’ culture. Women from other Fulani groups wore copper or brass leg ornaments or anklets made by the lost wax coating process. These rings might once have served as currency. 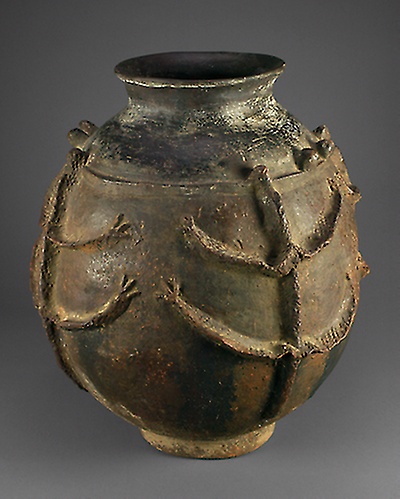 export to csv with group by